The Anthology of Interplanetary Folk Music vols. 1 (Nommos/Visting) and 2 (The Canon) 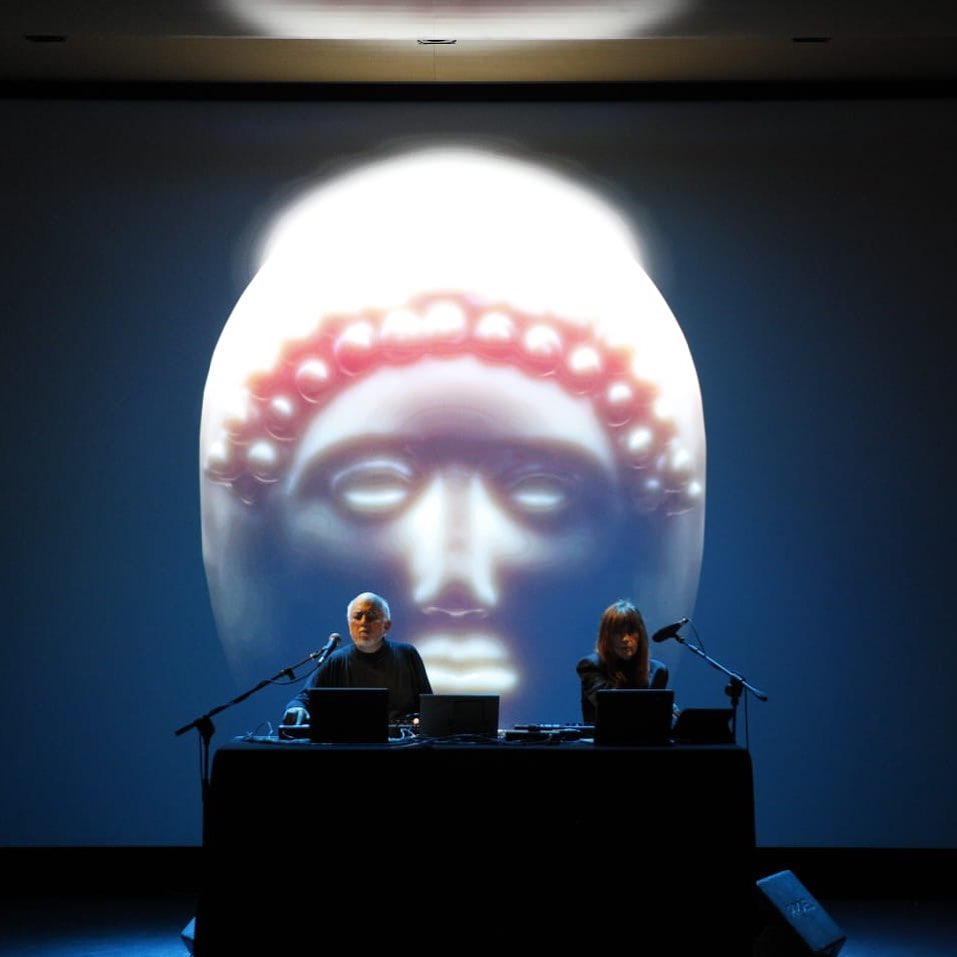 "Nommos is a concept album inspired by the creation myth of the Dogon tribe of Mali, the result of Leon's visit to an exhibition of Dogon sculpture and art at the Brooklyn Museum in 1973. The track titles on Nommos are taken from the names of the statues he saw there (one of which is pictured on the Peter Saville-designed album cover below). Their belief system revolves around the star Sirius, which has a sister star, Sirius B, that is undetectable without specialist equipment. Sirius B wasn't discovered by Western astronomers until a few hundred years ago, and was only photographed for the first time in 1970, and yet it's been part of the Dogon's creation story for thousands of years. The Dogon creation story goes that the Nommos, from Sirius B, visited Earth thousands of years ago, and left a great body of knowledge.” from The Wire - Craig Leon: Ghost riding on Sirius B - October 2013 .

Craig Leon is an American-born record producer, composer and arranger.  Leon was instrumental in launching the careers of many recording artists including The Ramones, Talking Heads and Blondie. Active in pop and rock music production from 1974–1998, Leon has focused on classical composition, orchestration, arrangement and recording from 1998 to the present. His main area of recent concentration is the creation of new pieces from early and folk music sources.

His work appears on classical recordings with artists including Luciano Pavarotti, Andreas Scholl, Sir James Galway, Joshua Bell, The London Chamber Orchestra, Dresden Staatskapelle Orchestra, Sinfonietta Cracovia, The Royal Philharmonic Orchestra and The London Symphony Orchestra. Craig's composition and production work has featured in a large number of film sound tracks over the past four decades. Most recently his arrangement of an American folk song " I Am A Poor Wayfaring Stranger" was the central musical theme of the film "1917"..

This is a performance of Craig Leon's seminal work in progress _The Anthology of Interplanetary Folk Music which includes the albums "Nommos (1981)", Visiting (1982) and the recent addition to the project "The Canon" which was released in late 2019.

The pieces tell the theoretical (or is it?) tale of a mythical music system invented by the inhabitants of a distant star system who were encountered in ancient times by The Dogon people of what is now Mali. The beings, known as "Nommos", were the messengers who taught the ways of advanced civilisation and religion to the Dogon.

In the 1970s and 80s Craig Leon wrote and recorded his concept of the music these visitors brought to Earth in those ancient times.

40 years after the first music was written Leon released vol 2 in the series which details the Earthly travels of the music from Africa to the Mediterranean are in later, but still ancient times.

Craig and his long-time collaborator Cassell Webb have been touring live performances and audio/visual installations of the work from 2013 through the present.

INSTALLATIONS AND TALKS IN CONJUNCTION WITH PERFORMANCES OR STANDALONE.

An URBAN FOLK MUSIC: UNDERGROUND NEW YORK IN THE 1970s. In the 1970s a new super traditionalist form of music came out of New York art scene based on the work of pioneering artists such as The Ramones, Suicide, Talking Heads, Blondie, Richard Hell, Patti Smith and a host of others. Craig Leon was heavily involved in the recording and presentation of the music of these bands. This is a talk on that scene and how it influenced others including the work of Craig.

ANCIENT FOLK MUSIC TO NEW CLASSICAL FORMS. An immersive audio/visual exhibition and a talk on two 20th Century works that created new musical forms based on ancient folk music. In 1913 Igor Stravinsky used ancient Lithuanian folk music sources and techniques applied to classical instruments to create Le Sacre Du Printemps (The Rite of Spring) a unique work that created an alternative world based on folk tradition and startled the audiences of the time. In 1981 Craig Leon used ancient concepts of the folk music of North-western Africa and Ancient Greece to create The Anthology of Interplanetary Music which created a mythical world of the folk music of a planet other than our own. This work was heavily influenced by the techniques of Stravinsky and his pupil George Antheil. This exhibition plays back new immersive Dolby Atmos versions of both pieces with visual accompaniment. This also can be given as a talk with conventional stereo , quadraphonic or 5.1 playback.

"Craig Leon revisits the extraterrestrial origins of civilization on Anthology of Interplanetary Folk Music Vol. 2: The Canon. Picking up where the pioneering electronic albums Nommos and Visiting (Anthology of Interplanetary Folk Music Vol. 1) left off, The Canon traces the imparted knowledge of alien visitors as it spread from Africa across the ancient world. Co­produced and featuring vocals by Cassell Webb, the pair engage a sonic pallet familiar from Vol. 1, updated with ecstatic contemporary sound and synthesis, creating a propulsive, exploratory album of cosmic lore and speculative anthropology.. " - Burl Veneer, 2019

"Visionary, evocative and simply just great to soak in, time will probably have to reveal this marvellous album as one of 2019’s major electronic works. " - Electronic Sound

"One of my primary loves is folk music," says Leon, "but I didn't want to try and make an African album, I actually wanted to make what the folk or pop music on the Walkman of the guys coming down from the sky might have been... it's not an overt attempt at African music, but it does use very basic African rhythms as a root. I tried to get the earliest things we had on the planet, not in terms of sounds, but in terms of the simple modal chords and melody lines.” - Craig Leon interviewd on The Wire, October 2013

“...what's interesting about Anthology is that it was always meant to sound like a transmission from the past. As his invented genre of "interplanetary folk" attests, Leon was drawn to the interplay of apparent opposites: antiquity and progress, earth and space, and, of course, new age and punk. Anthology is not an anthropological attempt to replicate (or colonize) the sounds of the Dogon tribe, but rather something more creative and personal—a sonic work of speculative fiction that uses "new" technology to imagine a time before recorded music. Neither primitive nor futuristic, it still has this uncanny feel of music that exists somewhere outside of time.” - Lindsay Zoladz, Pitchfork, 2014

The Gates Made Plain

Four Floods Of The Point