Khamangani! Spectacular news! Ustad Lakha Khan has been bestowed with the Padma Shri (or Padma Shree) - India's fourth highest civilian award for the arts. He is a living legend, and perhaps the greatest sindhi sarangi maestro, and a keeper of India's songbook, a voice of unity and secularism. Second to the Left is proud and honoured to work with, and represent Padma Shri Lakha Khan. Our heartiest congratulations and best wishes to the maestro for the long overdue recognition he deserves, and a big thank you to all the presenters, bookers, festivals, friends and well-wishers who have been part of this decade-long journey. Shukriya, Dhanyavad!

A living legend and the undisputed master of the sindhi sarangi - A national treasure, at 70+ Lakha Khan is a Sangeet Natak Akademi award winner for his contribution to Rajasthani folk music, and perhaps the greatest exponent of the sindhi sarangi. Born in the village of Raneri in Jodhpur district, Rajasthan, India into a family of traditional musicians from the Manganiyar community, he was trained at an early age in rendering the compositions of the Multan school of Manganiyars.

His first public performances were in the late 60's and 70's in India, and under the guidance of the late ethnomusicologist Komal Kothari, toured Europe, UK, Russia and Japan through the early 90's. He resumed international touring in 2013 with his first ever US tour, and now completed three US tours, and two European tours in Belgium, Denmark and Sweden. Today, Lakha Khan is one of the last remaining Manganiyars to have mastered this complex instrument and to carry forward the centuries-old musical tradition of Rajasthani and Multani folk and Sufi music.

His music is truly secular and straddles both the classical and folk domains, with a vast songbook that incorporates Meera bhajans, Sufi kalaams, popular Hindi tunes, and the ancient stories and oral histories of the region, spanning the western Indian sub-continent. He sings in over six languages including Hindi, Marwari, Sindhi, Punjabi and Multani. Bestowed with a powerful and melodious voice that perfectly compliments his instrument, Lakha Khan's music transcends boundaries and invokes a spiritual oneness in the listener. He is accompanied by his son Dane Khan on the dholak - the double headed Indian folk drum. 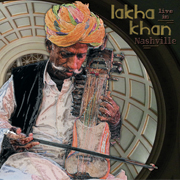 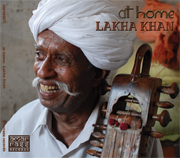 Single take recordings at home in Raneri, Rajasthan. Sangeet Natak Akademi awardee Lakha Khan, from the village of Raneri in Rajasthan’s Jodhpur district is one of the foremost proponents of the sindhi sarangi, or Indian folk fiddle.

""A packed Janskerk listens to the mesmerising Lakha Khan during Le Guess Who." ... , while that same church is packed for Lakha Khan, master of the sindhi sarangi. The complex bowed string instrument from Rajasthan India sometimes sounds like a mesmerizing bagpipe, other times surprisingly melodic. It's a beautiful experience in the stately church, while spirits and gods from Hindu and Sufi traditions are honored through music.NRC (NL)

"In the master's hand, the Sufi-influenced melody he coaxes from it (the sarangi) is transformative" - Michael Sullivan on National Public Radio (NPR) Weekend Edition.

"At Home is a superb set of field recordings" - Peter Margasak, Chicago Reader

Searching for the blues

Lakha Khan sings Bulleh Shah's 'Khedan De Din Chaar' (you have four days to play). Some of the lyrics translate to "don't accept loss, because this time will not come back". Recorded live at WOMEX '19 in Tampere, Finland at NRK Studios on 26 Oct 2019. (c) 2019 Amarrass Records

A short visit to the master musician Lakha Khan, at his home in Raneri, Rajasthan in May 2019. Stay tuned for his next release on Amarrass Records featuring field recordings, live and unreleased sessions.

**** "No frills needed; just great playing from an Indian master" - SIMON BROUGHTON Songlines
| "In the master's hands, the Sufi induced melody he coaxes from it (the sarangi) is transformative" - NPR

At Home with Lakha Khan

"meda mehar muraad na milda, kinnu haal sunaawan dil da?" My deepest wish (is to be with the one), and until i find you, what is the point in explaining the condition of my heart?

Lakha Phulani is a folk song from Rajasthan, India and about a rich donor Lakha Phulani, who settled in Bhuj (in Gujarat) and was reputed to donate one lakh (one hundred thousand) rupees before he sat down for a meal.. a testament to the many donors of Prospect Park, Brooklyn New York. Lakha Khan - vocals, sindhi sarangi, Dane Khan - dholak. Recorded on April 9, 2013. © 2013 Amarrass Records

Bhanwarji Kalali (or kalhali), a traditional folk song which references the king's hunting party and the liquor-still baron - sung by Lakha Khan, one of the greatest sindhi sarangi players from the Manganiyar community of musicians in Rajasthan. Accompanied on the dholak by his elder son Dane Khan. Recorded in Raneri, Rajasthan at a retired schoolmaster's farm storage shed (which had several bags of cumin stored in the room, and making this possibly the sweetest smelling session!)

Tulsi Kya Karoon - Lakha Khan. From the album "mitha bol", 2011 Amarrass Records. This recording was made late in the evening at Lakhaji's home in Raneri, our last stop before the marathon 10 hour drive back to Delhi. The sarangi is arguably the most difficult Indian instrument to master, and very few musicians—in either the classical or folk traditions—have been able to make its bow and strings do their bidding as well as Lakha Khan. The fourth in the line of master sarangi players, Lakhaji's home in Raneri is also somewhat of a museum where instruments, some more than a century old, have been carefully preserved. A philosopher musician with no classical training, Lakhaji's knowledge comes from his forefathers; his virtuosity from decades of practice. His genius, though, is a pure gift.

Sorath performed by Lakha Khan (sarangi) and accompanied by his son Dane Khan on the dholak, at the Amarrass Desert Music Festival on November 27, 2011 at Siri Fort Auditorium, New Delhi, India