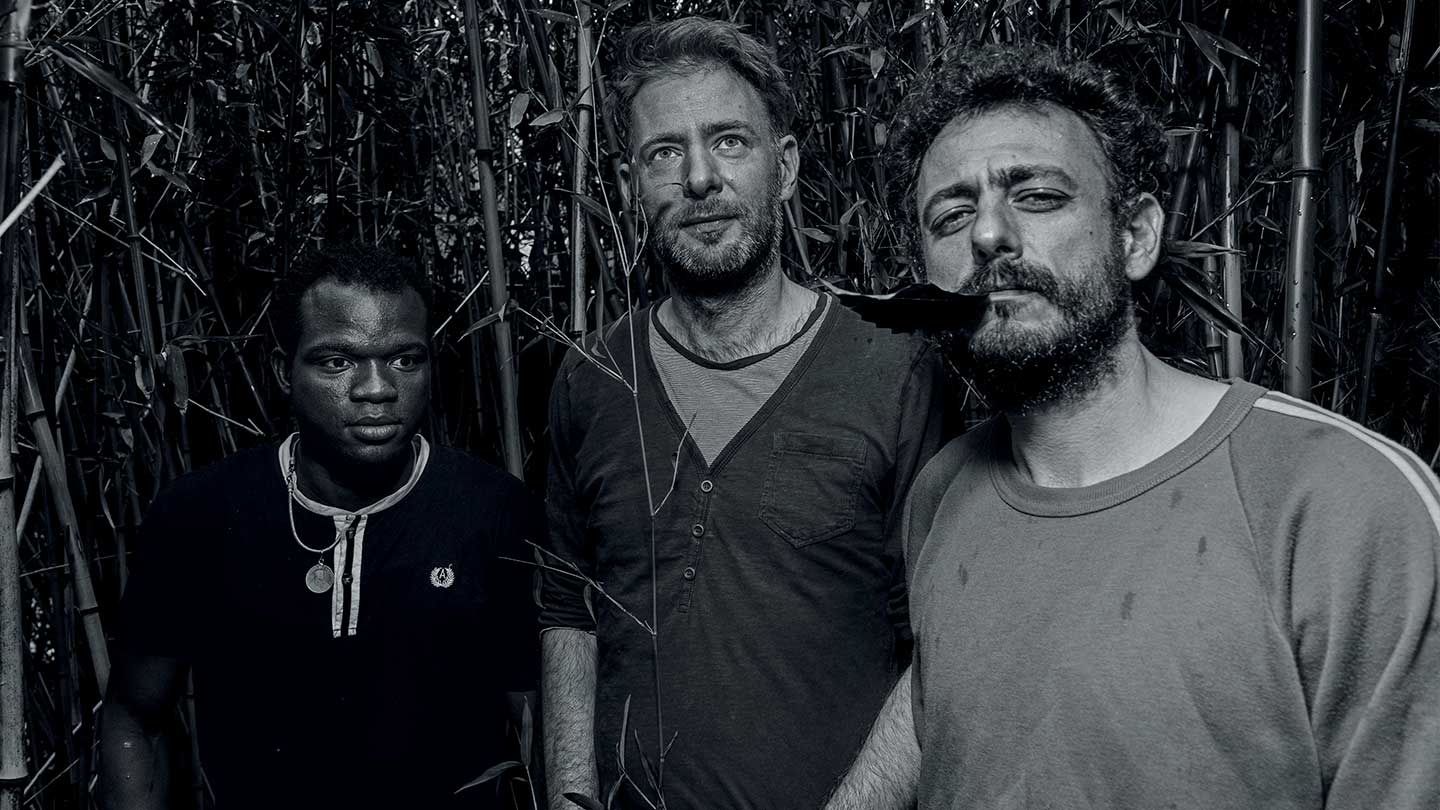 "we lived some memorable concerts, in particular that of Avalanche Kaito which will remain for many one of the biggest slaps of this edition of Micro Festival. A devilish drumming, an angry guitar and a charismatic singer, Avalanche Kaito is a bit like if Black Midi had discovered some traditional African instruments. The ethno-noise trio literally set the stage on fire by creating a trance that was hard to resist and that will have left its mark on everyone. It's hard to believe that this was the group's second concert as the atmosphere was so electric.” Renaud Verstraete, RTBF - 10 August 2021 .

In 2018, a Burkinabe griot meets the Brussels noise post-punk duo Le jour du seigneur. It’s a completely new alloy and it’s also a huge opportunity to deconstruct knowledge and create a brand new playing field. After a few adventures in the scenes of the European underground, singer / poly instrumentalist Kaito Winse and drummer / pure dataist Benjamin Chaval (Bargou 08, Le jour du seigneur) invite Nico Gitto (Facteur Cheval, Zoft, Why The Eye ?) on guitar. They will develop a crazy universe between experiments without a net and incredible postmodern grooves. This is truly the world as it is: a world of travelers who meet. Like Kaito, they can both claim to be guardians of tradition and curious about all combinations. Others, like Benjamin or Nico, are more the kind of multikulti. They share a desire to reinvent. They are ready to follow the backwater where it will move according to climate changes. It's a world of movement and too bad for those who are afraid. They’ve recorded an album in October 2020, to be released via GLITTERBEAT on 7th June 2022.

The trio mostly play Kaito's compositions, each making sure to write their part very freely. At the end all compositions are collective. The griot handles proverbs. These are the pillars of wisdom. He can both murmur and harangue, while his intense flute solos come straight from a free jazz he never knew. Nico brings this very rare quality of being both able to ensure the groove of a very uncommon rhythmic barytone guitar and develop sophisticated sound experiences. Benjamin plays his destroy drums with two cut pieces of brush handle. Also he provides an important Pure Data electronic part partially controlled by triggers, a real fourth wheel to the coach. ches out to encompass the entire Maghreb area of North Africa.

BENJAMIN CHAVAL - After graduating from Conservatory, and a cabinetmaking CAP, Benjamin has been performing as a drummer in many orchestras from jazz to experimental music. He then moved on to groups combining both improvisation and writing. Over the years, at the same time as he moved towards other stage experiences, he integrated elements of electronics into his music. Today his tools range from a simple piece of wood to Pure Data software. Benjamin has been part of such diverse bands as Bargou 08 (with Sofyann Ben Youssef), Scarlett O’Hanna, Le jour du seigneur (with Arnaud Paquotte) or Zoho with Aymeric De Tapol, Arnaud Paquotte, Grégory Duby.

NICO GITTO - Guitarist, bassist and percussionist, he shines in many projects of the Brussels underground scene, such as Why The Eye?, Zoft, Scraboutcha, Facteur Cheval. His vocabulary is based as much on a solid sense of rhythm and unstoppable grooves as on a love of advanced sound research. He leads “D.I.Y” construction workshops (“cheap microphones” ; construction of instruments inspired by “lutherie sauvage”). He draws his inspiration from free improvisation techniques, various studio recordings and soundpainting to develop a conducting system for a wild percussion ensemble.

KAITO WINSE comes from a Burkina Faso griot music family. From an early age he was raised in the traditions of his family in the village of Lankoué, Sourou region in the north of Burkina Faso. He is now living in Brussels, Belgium. He is the spokesperson for a singular and complex poetic universe. His powerful and bewitching voice recalls the intensity of opera technique and invites you to listen to messages that carry ancestral truths. Kaito plays multiple instruments ranging from vocals to the calabash, including the mouth bow, kora and tama. He invokes the different popular, praising or festive rhythms through his instruments. His music is a unique experience where musical codes shatter to find themselves at the crossroads of traditional, learned and popular music. In March 2020, recently installed in Brussels, he was selected as part of the Matongé Sounds artist support program organized by Muziekpublique. Kaito has released his debut album Kaladounia via Rebel Up, a 60 minutes solo recorded live where his a cappella voice is gently suported by his traditional instruments.

"We were blown away by Avalanche Kaito, an energetic Belgian post-punk/no wave trio, led by a griot from Burkina Faso, that will soon make its debut on the German Glitterbeat label. " - Dirk Steenhout, Knack - 1st October 2021

"Brussels-based Avalanche Kaito took the stage not long before midnight and emerged as the surprise of the festival. Their Dutch debut concert. Completely unknown to the audience. A singer-songwriter from Burkina Faso plus an insanely good guitar-and-drums duo from Belgium who provided a festival apotheosis with an overpowering dose of Afropunk. " - Peter Bruyn, Leids Dagblad - 27th September 2021

"They are as their name suggests, an act who strike unexpectedly. And they are sensational. Quite what they sound like is another thing. Someone mentions they are like Black Midi and I can certainly see the comparison has some weight on one level, the wild flitting between sounds and rhythms, picking and dropping them like a frenzied root through a sock drawer. Post post post everything, I suppose. But still, and something very much unlike Black Midi; an enervating wall of noise given a focus by the incredible presence of singer, the Burkina Faso griot, Kaito Winse, who is both a magnet for the crowd and a realtime interpreter for the music. The other two lads shake out multiple refractions from rock’s prism. Again, (and like Black Midi, sorry), I can see them playing to a million people over Europe without anyone really understanding why it’s so addictive. The best kind of buzz.” - Richard Foster, Louder Than War - 26th September 2021

“We lived some memorable concerts, in particular that of Avalanche Kaito which will remain for many one of the biggest slaps of this edition of Micro Festival. A devilish drumming, an angry guitar and a charismatic singer, Avalanche Kaito is a bit like if Black Midi had discovered some traditional African instruments. The ethno-noise trio literally set the stage on fire by creating a trance that was hard to resist and that will have left its mark on everyone. It's hard to believe that this was the group's second concert as the atmosphere was so electric.” - Renaud Verstraete, RTBF - 10th August 2021